For a long time, prior to the recent trend of skinny battle belts, I was obsessed with the idea of being able to load carry with my belt without the use of what felt like a padded life saver ring dangling from my hips. I blame this partially on being trained and brought up on the old ALICE gear belts which were unpadded.

Overall I felt the industry was heading in a good direction with a lot of the newer, minimalist designs. The one option that immediately comes to mind when I think of a comparison to the Twin Needles Beltskin would be the OUB sleeve from Velocity Systems.  However, the OUB is a little more conventional.

Even so, I don’t think the OUB comparison holds up due to the extreme difference in price. Clocking in at roughly $31.00 at OP Tactical, I don’t think there’s a cheaper option to modify your riggers belt for light load carriage.

I have gripes with the belt, but a lot of it is simply due to the limitations of the design. If you understand what it was meant to be used for, as with most things, I don’t think a lot of people will part ways with this piece of equipment disappointed.

The name is apt as this sleeve is next-to-skin with the belt it’s designed for. OP Tactical warns it’s a snug fit but I don’t think it’s emphasized enough. Perhaps it was my belt, maybe it’s designed for belts without any stiffener at all. I’m not sure. I’ve yet to reach out to Twin Needles for comment.

Installing this easily took 20-30 minutes of tugging and pulling with pliers. It’s an incredibly frustrating experience. I nearly gave up and returned the item during this struggle. If I end up getting a Crye MRB I may just cut the belt skin off. I sincerely doubt my abilities to remove the belt skin with out damaging it.

The MOLLE channels are minimized in order to fit on the extremely limited 1.75″ footprint. Naturally that will lead to increase wear out and load limitations. With that said, the small profile of this belt allows you to use belt loops like on the CSM dumper in conjunction with MOLLE pouches, which to me is very handy. This is one of the flaws of the larger belt sleeves or load bearing belts in general – they aren’t usually compatible with both traditional MOLLE pouches and belt loop pouches. 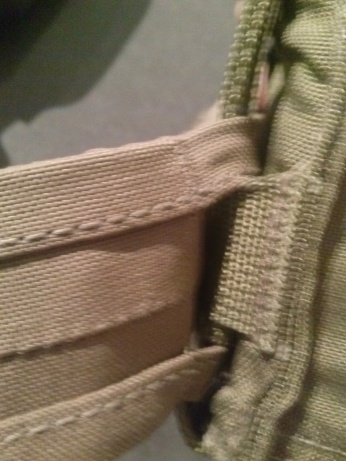 The inner belt skin is lined with loop, which is a nice addition for the price point. This to me is more useful for securing to an inner belt than a pad. I originally purchased the Twin Needles pad and promptly returned it. That review can be found here.

With the Belt Skin on, unfortunately, you will find difficulty using certain holsters using slider type attachment methods as shown. This S&S precision mount absolutely will not travel over the belt skin, leaving limited room for employment.
Due to the small and not very robust MOLLE channels I would discourage against attempting to use the S&S MOLLE mounting plate as well.

The Twin Needles belt skin comes in Coyote Brown, Multicam, Kryptek Highlander, Kryptek Mandrake and ATACs so depending on your mission and unit it you may already be precluded from using it. It is also made in New Zealand which may or may not be an issue.

The belt skin fills a performance gap for me while I continue to assess my user requirements for a belt load carriage options and analyze COTS solutions. I will most likely in the future move on to the Crye MRB.