I wanted to write a little bit from the perspective of someone who doesn’t have the legal authority to carry a push button folding machete with blood grooves and gut hooks.

The blade on the Kershaw Cryo is 2.75″ which puts this knife solidly in the realm of legal carry in most places (CONUS). Obviously it is your responsibility to check the actual statutes for your local state/country.

I find myself frequently in places that aren’t necessarily friendly to blades or place a lot of emphasis on the the intent of the blade, which made a few aspects pretty important when selecting the Cryo.

The Speedsafe assisted opening is the same type of assisted opening system that’s on the ZT knives. I’ve almost exclusively carried manual folders and I thought I’d give this a try. Already in the short time I’ve had it I’ve noticed the drawbacks of not being able to fully control the opening sequence of the knife.

I’d like to make a short disclaimer and note that I do not recommend or endorse carrying a knife as a defensive weapon. Nothing about this post should be construed as legal advise or interpretation of any laws herein.

The stonewash finish, namesake and drop point blade all give this knife the appearance of a utility blade, especially in contrast to this Zero Tolerance tanto folder.  This is important if your state allows “tools” but classifies dedicated defensive knives as “deadly weapons”. 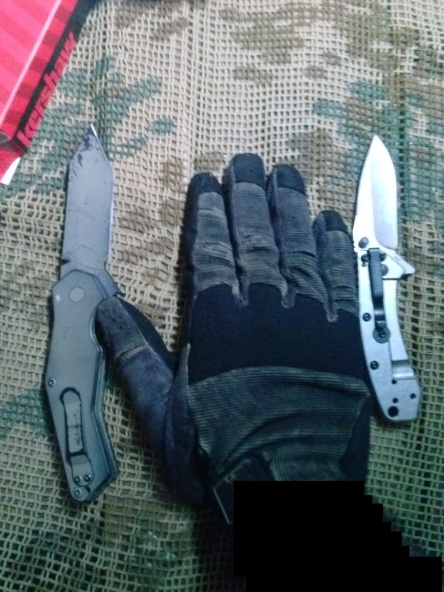 In case the other size comparison picture wasn’t obvious. My hand, a 3.5″ blade and the Cryo. This is a small blade. One of the reasons why you can get this frame lock for so cheap is it’s size.  I’ve seen a lot of customer reviews of people seemingly surprised at it’s diminutive size so I wanted to make it very clear just how big this knife is.

I wear a large glove due to long fingers, not necessarily large hands. Medium gloves fit me great but the fingers are too short. With that said, I can not at all get a full grip with how short the handle is.

Gripping the knife isn’t uncomfortable gloved or ungloved. The handle itself is a pretty conservative design which is probably why it’s not a wonderful grip either. 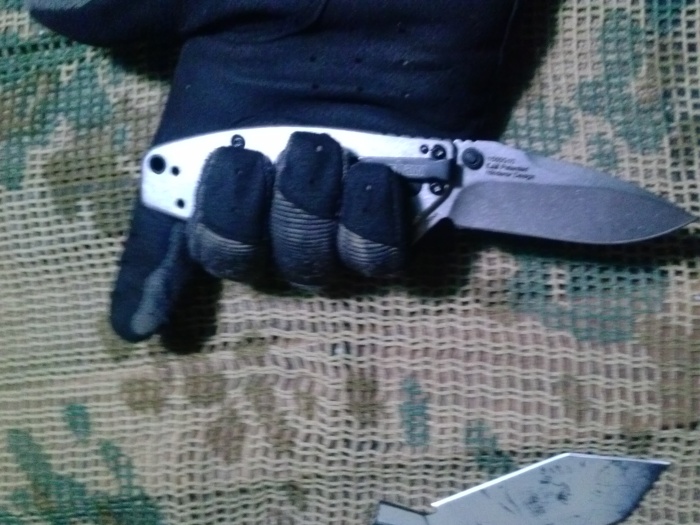 The reverse grip is just not recommended. It’s uncomfortable and I don’t feel like I have control over the knife. I’m a  knife layperson so  I can’t necessarily articulate why I hate the reverse grip. My ZT folder, which is a LOT more expensive so it’s an almost unfair comparison, has a far more aggressive grip design and I love the reverse grip on that knife. 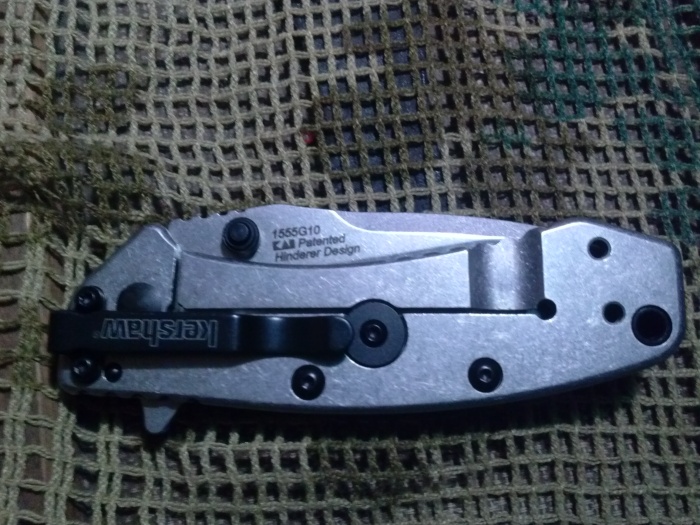 The stonewash finish is pleasant to look at on both sides of the knife. The knife comes default with the clip in the tip down position which blew my mind.  I’m not sure why on earth anyone wants to carry tip down. The screw used for the pocket clip is smaller than the 500 allen keys and torque wrenches I already own, so I’ve yet to swap it out.

The thumb stud is symmetrical and stepped roughly halfway down for getting a good purchase with your thumb. From feeling alone it seems like it’s either coated aluminum or plastic. 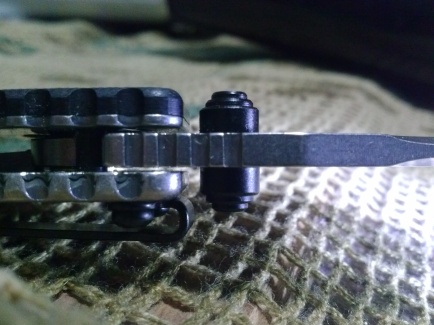 As you can see, the steps on the thumb stud do not go all the way down to the blade. This might be a little disappointing if you are used to more aggressive thumb studs. 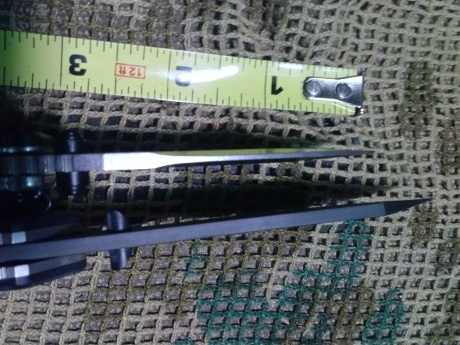 I’d give you exact blade width if I had a micrometer but I do not. You can plainly see though, the blank they work with on the Cryo is about as thick as the ZT. 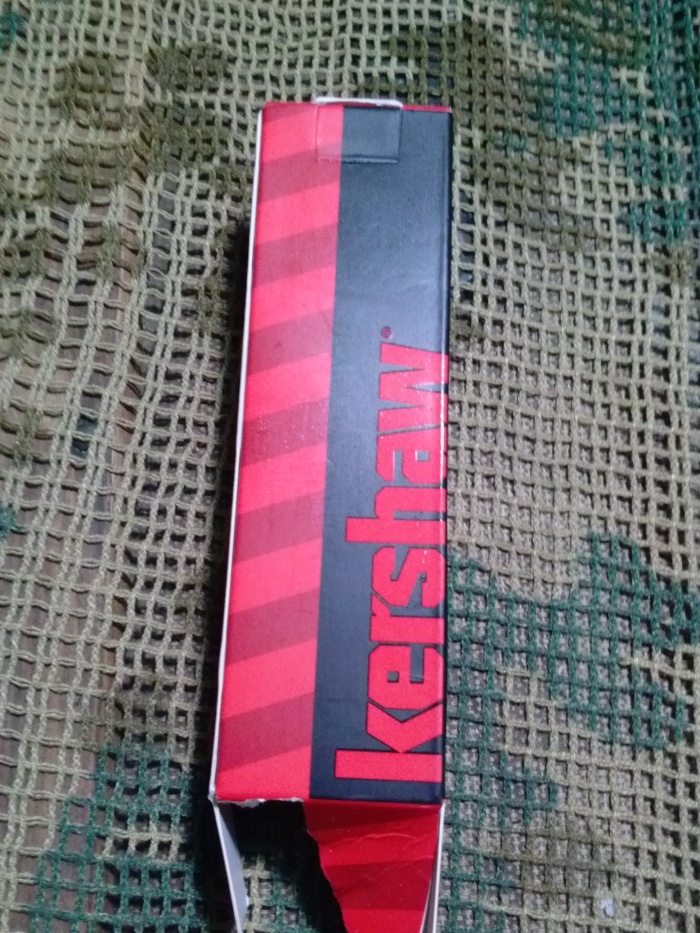 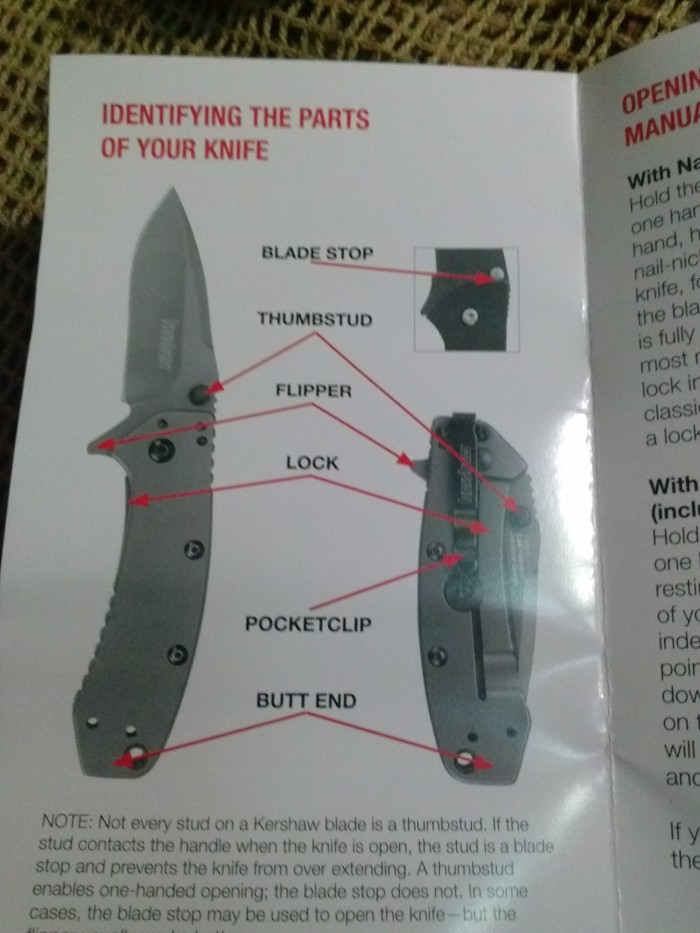 The manual that Kershaw included was actually thoughtfully put together. It included a complete diagram identifying all the parts of your knife. 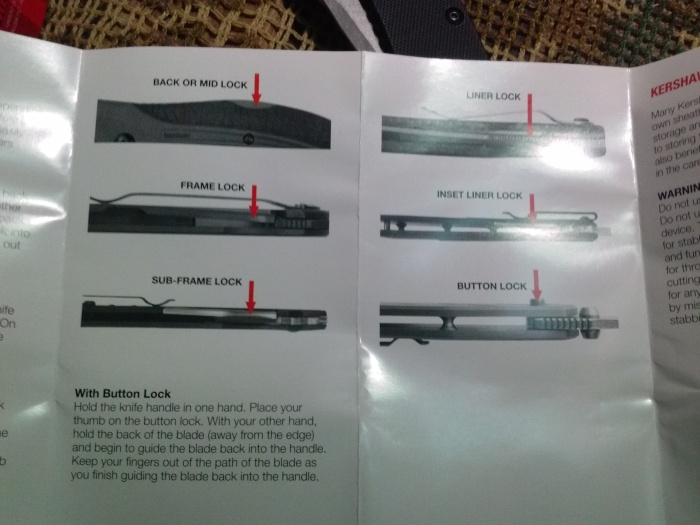 Also included was a complete section explaining a large number of different locking mechanisms for knives. This is really helpful as it is visually easy to understand the differences when it is arranged like this.

This could be a solid solution for someone looking at a stop gap while they wait for a sale on Emersons or another high end brand, a dedicated travel knife or continue to research a more expensive folder.