This is going to be a very short review as there’s a pretty huge problem with the only redeeming side of War Thunder. To be fair, any game that tries to include both an “arcade”mode and a “realistic” mode simply by adjusting some values is usually heading into troublesome waters.

In terms of being educational or offering some redeeming knowledge for time spent, War Thunder actually has some potential. Unfortunately most of these descriptions are completely blank.  For being so far along into its beta it seems like this wouldn’t have taken so long to flesh out.

The armour viewer itself is really neat and easily something I would play with as a stand alone program, especially for modern vehicle. The armour thicknesses are usually very accurate.

This is another feature in your garage in the game. It’s a basic “module” viewer for each tank that indicate where exactly are key features or components of the tank are laid out. It can be surprising just how oddly certain famous tanks are laid out. 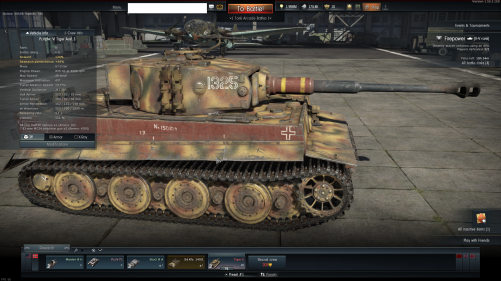 Gaijin hasn’t put a priority on historical realism for some time however. This beautiful skin was actually produced by the community. Luckily, the game has an integrated skin swapper so you aren’t necessarily bound to whatever skin you currently have installed in your directory.

Gaijin seems to want the E-sports crowd and has recently introduced lime green camouflages and pirate skull decorations for the tanks. The user is currently unable to turn off these skins.

Not everyone is upset about this shift in direction for Gaijin. For me, this move is a pretty huge let down and is a defined signal that they do not want to cater to the simulator or realism crowds – people who genuinely enjoy the Graviteam, Steelbeasts, Combat Mission, Close combat series of games.

The latest Steam reviews are overwhelmingly negative. Majority of these reviews are from people with hundreds and sometimes thousands of hours in this game. I too have hundreds of hours in the game, but, I wanted to keep this review short, because for me the conversation ends before it can even start due to Gaijin’s refusal to address some pretty overwhelming exploits in the game.

Funnily enough it still has an 85% rating on Steam. This means that the hundreds and hundreds of front loaded negative reviews are all recent.

Finally I’ll leave you with a couple videos and a summary of why I don’t recommend this game whatsoever for anyone looking to get a remotely realistic tanking experience out of it. The only two viable game modes for this type of play are “realistic battles” and “simulator” battles which have massive wait times already as most people play arcade.

The reason why most people avoid SB/RB battles is because if you set your visual settings onto ULQ or Ultra Low Quality, it removes most shrubbery, tall grass and other debris from the game that obscure your vision.  In a game mode where spotting the enemy is entirely up to you actually seeing them, this is a massive advantage.

Despite being aware of this issue, Gaijin has made no attempt to fix this exploit. Please watch the videos below for an actual in game demonstration. Yes I realize the age of the videos – this remains an issue to this day.

3 thoughts on “War thunder Review: A ridiculous attempt at sim”